The event saluted the professionalism, commitment and enthusiasm of all those engaged in improving cycle facilities at rail stations, which has proven a valuable, and very cost effective, programme.

Presenting the awards Chris Heaton-Harris MP, Minister at the Department for Transport said “Making it easier to travel to and from railway stations by bike will get more people cycling, and help clean up the quality of our air.

“The winning stations have played an important role in making railways more accessible to cyclists and I’m delighted to announce £2.5 million, funding hundreds of bike spaces to make even more stations cycle friendly.”

Prizes were awarded for;

Cycling to a railway station makes sense as part of a longer journey – particularly a regular commute. A bike can get you to or from a station swiftly and help you keep fit in the process. It is cheap and, unlike a car journey, does not damage the environment. Your bike can get you to the station early in the morning or home late at night when buses may not be running.

The Cycle Rail Working Group (CWRG) consists of representatives of the rail industry, the Department for Transport and others with an interest in getting more people to enjoy cycling to and from rail journeys. The CWRG has been working for many years to improve cycle parking at stations.

Phillip Darnton OBE, chair of the Cycle Rail Working Group, said: “The Cycle Rail Awards have become a regular opportunity to show off some examples of the many projects – large and small – which, Train Operating Companies have delivered to make stations more appealing and accessible to those who cycle as part of their journey.

The start of this new decade is a timely moment to ‘showcase’ just a few of the original achievements of the past, and to encourage and inspire us to design and deliver new schemes for the future, to make cycling to and from stations across the country, easier, safer, more convenient, and attractive.”


At this Showcase event at London City Hall, hosted by Will Norman London’s Walking and Cycling Commissioner, the Group shared ideas and good practice, whilst hearing about future plans to improve cycle rail facilities.

Chris Heaton-Harris, Minister of State for Transport confirmed Government Commitment to further work in the area and announced a new round of funding (some £2.5m) to support new initiatives.

Will Norman, also confirmed his support for ongoing work to make it easier for people to cycle to stations as part of their journeys around the city.

David Statham, Managing Director of Southeastern spoke about how cycle rail makes sense for rail companies as well as for the wider community.

The Bicycle Association shared an update on developing standards for cycle parking. It is recognised that some equipment in use today is not as good as it could be and the aim of the standard is to ensure that this situation improves. 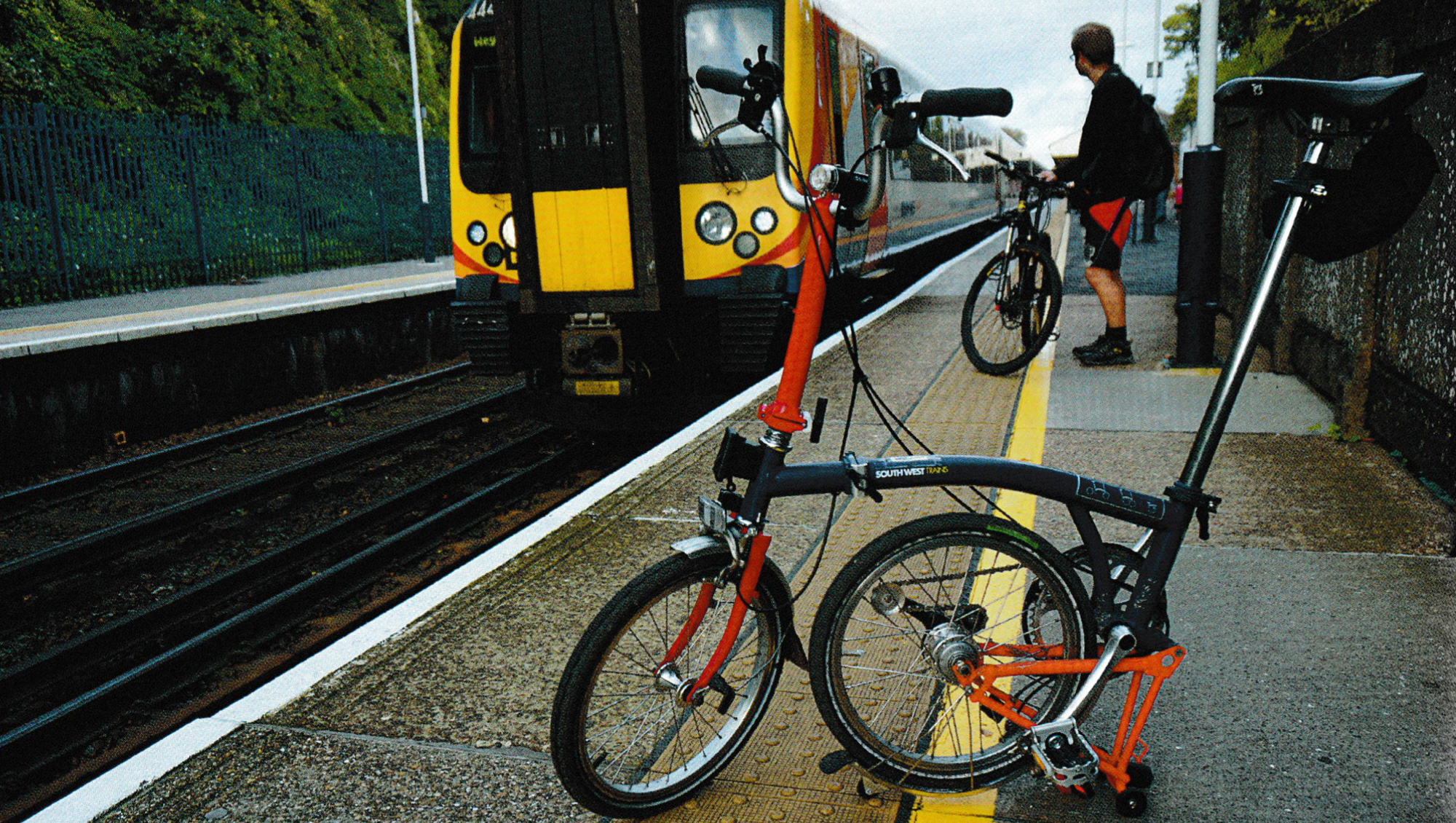 Thank you to all of you who have submitted entries for consideration for the Cycle Rail Awards special showcase event.

The judges are now carefully scrutinising all entries and will be selecting those they feel best demonstrate commitment to and the success of Cycle Rail travel integration during over a decade of investment into cycle parking and security across the rail network.

Good luck to all who have entered. The results will be announced at the showcase event at London’s Lounge, City Hall on Wednesday 15th January. 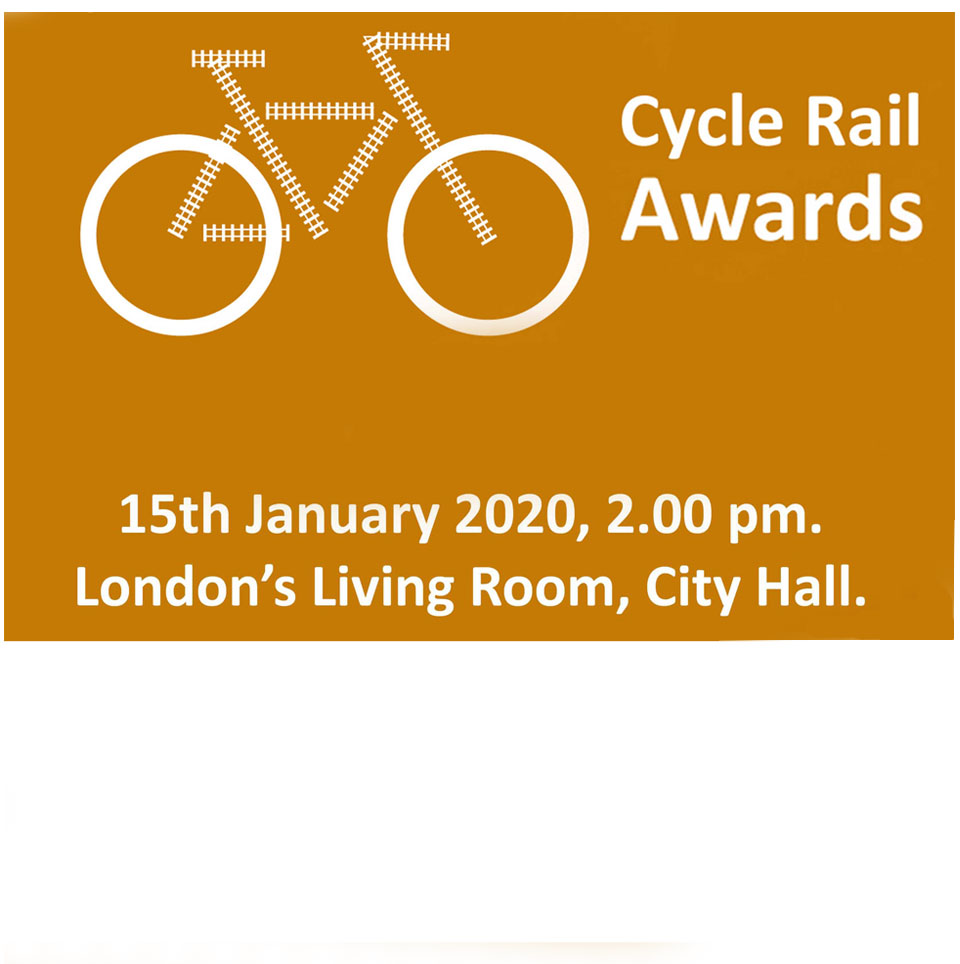 The Cycle Rail Awards 2020 launch event kicks off on 15th January with an invitation only, showcase event at London’s Living Room at City Hall.

Hosted by London’s commissioner for walking and cycling, Will Norman, the event will highlight how government investment in new Cycle Rail infrastructure, such as high quality, secure cycle parking at stations has transformed how tens of thousands of people now access rail travel by bicycle.

The January event will showcase the best projects delivered through the Cycle Rail programme and will announce the categories for the next Cycle Rail Awards, which will be held later in the year in November. 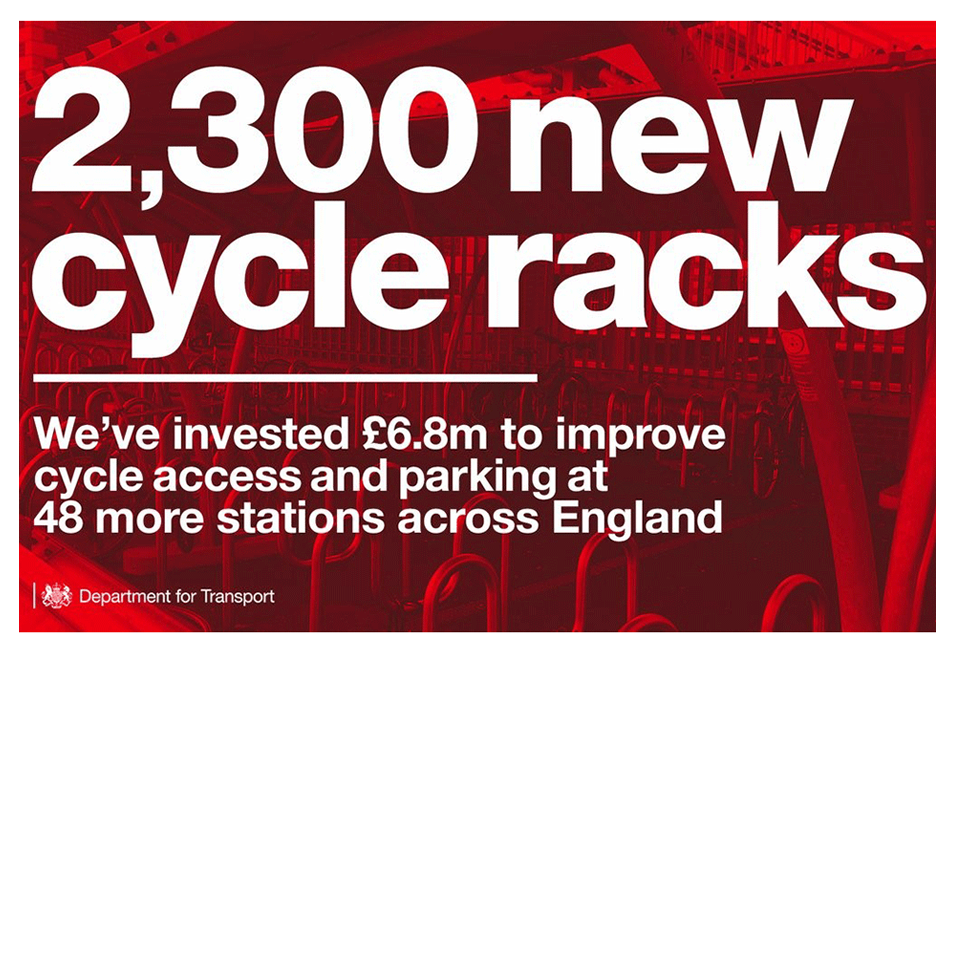 The Department for Transport has announced new investment in the Cycle Rail programme that will add thousands of cycle spaces to rail stations.

Thousands of rail commuters will be able to make cycling a seamless part of their journeys thanks to a £6.8 million government investment.

Cycling and Walking Minister Michael Ellis has today (14 June 2019) announced an extra 2,300 cycle spaces to be built at 48 stations across England, enabling commuters to cycle directly to the station and lock up their bike securely.

The investment is part of the Cycle Rail programme, now being backed by over £40 million from the Department for Transport. It has helped tens of thousands of cyclists to make their journeys to work joined up and sustainable.

“This latest, most welcome grant to the Cycle Rail Working Group continues the Department for Transport’s successful funding programme which, over the last 5 years, has directly led to the number of trips to and from stations by bike more than doubling.

This cost-effective investment really does work”.

The Cycle Rail programme has already tripled the number of high quality and secure cycle parking spaces at more than 500 stations, bringing the total to over 80,000.

Sustrans the charity making it easier for people to walk and cycle has been appointed by The Cycle Rail Working Group to manage the annual Cycle Rail Awards which recognises and rewards projects that encourage people to access rail travel by bicycle.

The Cycle Rail Awards have been running for more than a decade during which time more than 80,000 high quality and secure cycle parking spaces have been created at stations across the rail network.

“Sustrans are dedicated to connecting people and places, creating liveable neighbourhoods, transforming the school run and delivering a happier, healthier commute. As such they are the perfect partner to help promote development of Cycle Rail integrated travel through the Cycle Rail Awards.

We are delighted to have them on-board”.

By continuing to use the site, you agree to the use of cookies. more information